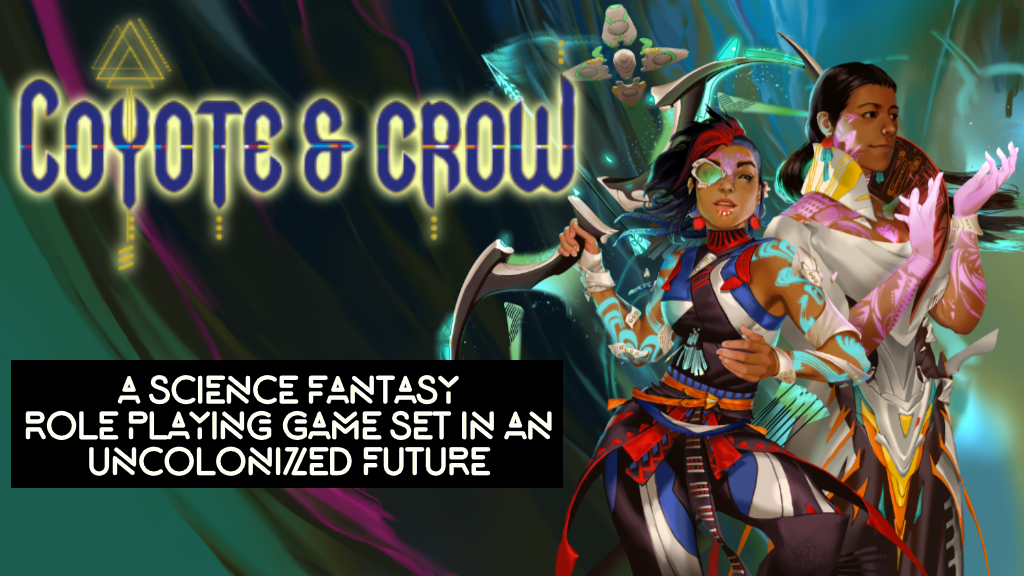 tl/dr at the end

The game was written and produced by people indiginous to the Americas. That right there is why I backed the book on KS.

The game System is a dice pool system using d12s. It's like WoD on crack. There are some nice nuances to it, but nothing you wouldn't see in many modern rpgs.

The science of the setting is 10 minutes into the future, maybe 20 minutes. There are cyberpunk elements like robotic hands.

The setting itself is, "What if white man never showed up in the Americas, because of some sort of global event?"

Now let's discuss what the book needs: a product developer, an editor, and a smaller font size.

I don't know what the deal is with using large fonts in rpgs, but I am not a fan. Yes, it's an aesthitic thing, but my preference is for smaller, cleaner fonts.

The book lacks the focus an individual developer, or even a duo. Everyone is having their say and quite often, that "say" is repeated throughout the book an inordinate number of times. Everytime technology is mentioned, they remind us that many things in the world are created on their version of 3d printers. I don't need this mentioned every single time. Work it into flavor the text once per chapter at most and then go whole hog in the Equipment or History chapter.

The authors of the book spend a good amount of time telling the reader how horrible our world is. I mean, they aren't wrong, but I would say it is mentioned on average once per four pages.

They spend a lot time reminding the reader how much different the game's world is to ours, but that it is exactly the same. There is no form of currency, but there is. They aren't going to provide in-depth background on the monetary/trade system, but do so for several pages.

The authors make sure they tell non-indigenous what they are not allowed to do in game at every opportunity. "Hey indigenous people, work in your people's culture here. White folk, don't do anything related to indigenous people. Insert some white folk stuff that isn't too racist and use that." This occurs often enough, that I am reminded I am a racist, horrible person and I helped enslave/destroy/continue to destroy indigenous culture.

Newsflash! I'm third generation born in the USA. My people came here because the same people that ruined the Americas were also ruining Europe and they were looking for a better place to live. To the best of my knowledge, they did not do anything to harm the indigenous people of the Americas (including those in Canada and the USA). My grandmother's sister would answer "human" when asked about her race. I'm sure there is/was racism in my family. I know I've made mistakes in my past. An rpg is not the place I want to hash out my personal and familial issues.

I understand that indigenous people were proper fucked by non-indigenous people and that current laws are still fucking them over. However, the people responsible for that are highly unlikely, in my opinion, to buy this book. I guess they might, but why? Also, take their money and use it to fight them.

Apparently, I'm not the only one with this opinion, because the company's website has an article on allowing white people to play the game. The producers are quite tired of how white people are reacting to the book. It looks like not only are the standard white people an issue, but so are the woke white people, as well. Look, more double speak.

tl/dr: I didn't care for the book and I'll sell it to you for $60 with media mail shipping. Or you can get just the .pdf from a white man website for $25.

Posted by Undeadhost at 7:32 AM