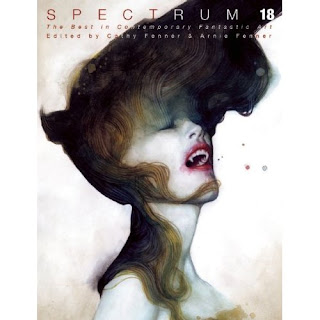 I was browsing through Spectrum 18 last night when my fiancé asked why I liked to do so. I had to think about it for a moment. My immediate answer in mind was, “because it’s got all this neat, cool stuff in it.” I knew that wouldn’t suffice. It’s too personalized of an answer and doesn’t convey anything useful to her. She likely would have rolled her eyes, muttered something under her breath and moved on to the next level of Angry Birds Seasons (yes, there are different releases for Angry Birds – it isn’t a one game deal).

So, I thought about it for a moment. Why was I looking through this book of art? First off, it was a gift. I have been receiving them as winter holiday/birthday gift for the past four years and I had just received this issue. Being that it was brand new to me and a book, I wanted to dive into it, right away! Mostly, though, I look through it for inspiration, inspiration for all manner of things. Let me explain this series of books and then I will give you some examples of the inspiration I receive from number eighteen.

The Spectrum series of books is advertised as, “The Best in Contemporary Fantastic Art.” This volume and others were edited by Cathy Fenner and Arnie Fenner. The publisher on this volume (copyright 2011) is Under Wood Books. The book starts off with a word from the Chairman of the annual Spectrum Fantastic Art jury, gives us a quick blurb and photo of the jury, a nice, but brief article on this year’s Grand Master Award winner (Ralph McQuarrie), next is an article by Arnie Fenner, and finally it moves on to the art. 283 pages of art in the form of drawn, digital, or dimensional media. It wraps up with the URLs for the various artists. Sure, the words are nice to read, but 283 pages of art!

The art includes published and unpublished. The publishers give us the art directors, clients, medium, size, title, and artist for each piece. One to four pieces are on each page, supplying more than 283 works to review.

The first piece to strike me is one by Jesper Ejsing. The oil painting is of a werewolf engaging a mortal man in a hand to hand fight, a pack of wolves scatter the outside of the fight, the moon is yellow off in the distance, and the scene is flowing down a snow bank. You will never get the visual by my words alone. The mood reminds me of something I might expect from a Batman cover. The work was for the Ravenloft setting by Wizards of the Coast. I’ve always wanted to play in or run a Ravenloft game. I know so little about it that I can be safely intrigued with no ruination upon my imagination. Eastern European flavored fantasy game of horror. Sign me up!

Jason Chan’s work, Sooner Dead, is a digital entry. The depth of field is wonderful, the shear craziness of the image is wild with a human female in fantasy garb with a anthropomorphic, biker, bison riding a giant lizard with tires for wrist bracelets on the run from a biker gang of unknown origin (perhaps magpie or mouse), with power lines flowing overhead and perhaps factories in the background. The depth and detail in this let me sit back and study. I can let my eyes un-focus and notice new bits and bots. Sam Brown’s Space Station 05 does something similar, but with a hallway. Details here, details there. You will never see all of them, but you will always see something. Life is like that, there is more depth than you will ever know and just when you think you’ve seen everything, you can turn around and get smacked in the face by something else.

Artists like Paul Youll, John Harris, and Daniel Dociu provide hard sci-fi vistas that remind me of books and magazines I read as a child and teenager. These often provide me with inspiration when writing fiction or creating set pieces for games like Traveller, Star Wars, or Diaspora. Ginormous (is that a word?) space hulks, speeding cruisers, large cloud formations, and a feeling that time is running out.

There are classic art stylizations, like the comic book character Daredevil drawn similar to Japanese line art paintings. There are rifts on classic characters like Little Red Riding Hood, the Caterpillar and Cheshire Cat, the Wizard of Oz, and even Dracula. You will come across several works that were developed for video games such as Guild Wars. The old suspects like Brom, Arthur Adams, and Steve Fastner & Rich Larson all make appearances.

There are maidens and warrior women, men in space suits and men in rags, monsters human and otherwise, heroes and villains, zombies consuming economics and zombies consuming pumpkin brains, wizards and witches and warlocks abound, robots and warnings to citizens of Mongo, there’s even a sculpture of Vampirella.

All of these works show me different ways to look at things in the world and spin them for creativity. I can use them for music or writing or roleplaying. Their mood, their form and color, their smiling, fanged faces or axe wielding bodies spark ideas and lead to hastily written notes saved for later. Sometimes, those notes don’t stop and they keep going and going and going, only stopping hours later due to a cramped hand or a lack of paper to write upon... and no paper towel or napkins to supplant the stuff of standard writing paper.

I have developed games taken from music sources. Blue Oyster Cult’s songs surrounding Astronomy was the primary source material for the first Silverbrook game I ran years ago for LDB, Michelle, Randy, and MrFenris. I have story-arched a fantasy game based upon Queen’s first two albums. If I can do this with music, why not art?

Looking through the various works of what I would call hard sci-fi in outer space works, I could see designing a game around them for Diaspora. Explosions ripping a space hulk into pieces. A team of troubleshooters races to recover data. Travelling to a far away planet to experience vistas undreamed. I can see 12 session right there.

If that type of setting isn’t your thing, maybe fantasy is? If so, there are more works of art for you in this book than any other genre. If you cannot find something here to inspire you, you simply aren’t looking or may not have an eye for inspiration through art.

And that’s what I told her, kinda.
Posted by Undeadhost at 2:44 PM 2 comments: