Jason has a new blog up over at The Wasted Lands disussing a game idea I have seen discussed around. I think Lowell and PeterAmthor would probably steal the most ideas from it. The premise is that the characters have all been brought back from the dead and given a second chance to be better people by a mysterious woman. All of the characters have died from their major character flaw. However, the catch is that they must fight against the supernatural evils in the world and punish sinners.

Jason goes at it from his Gnostic standpoint, tieing in various spirits and demons. The Archons get mentioned, as do vampires and werewolves. His plan would be to use Unisystem rules from Armageddon and give everyone Primal Powers. I think you could do just as good a job with Scion, Supernatural, or Kult if you have a copy. You could probably even do it with your favourite superhero game rules.

Jason's taken the idea from a band who released a concept album around the same premise, albeit with a comic book tie-in, as well. I know several of us have stolen directly or indirectly from music sources for campaigns in the past.

I thought the game idea was worth sharing. Give his short post a read and maybe you will gather ideas for your game or find new music to spin.
Posted by Undeadhost at 11:09 AM No comments:

Just a quick note that I've updated the blog roll. I've divided what was ne into two. The first is for non-gaming, the second for gaming. It looks like I may need to go through and retire some of the links, as they haven't been active in over a year

I also need to add Doug's, Nik's, and maybe a couple of others' blogs from Twitter.
Posted by Undeadhost at 9:15 PM No comments:

I have been forcing myself to do more reading and writing lately. I have been letting work overpower my time and my work is stagnating. Exposing myself to outside influences always helps prevent stagnation from setting in for too long.

What follows are four ideas I had for games to run. I find it interesting that only the first one is designed as a modern setting. The other three are fantasy settings. Still, I could potentially run the first one as a fantasy setting, as well. It could be very interesting to drop it into a Roman, Dark Ages, or Middle Ages world where the supernatural is not understood very well.

Of the three fantasy settings, the first two were designed together. You can think of them along the lines of a season one and a season two. They reflect my preference for low fantasy settings. The third fantasy setting was started after reading up on Ravenloft. I liked some of the ideas I saw in the game and didn’t like others. Plus, it gave me a chance to work in Kult to a fantasy setting, which I have wanted to do since John B-ski mentioned doing it.

None of these games are slated to be run, at this time. I am still running the AFMBE game. They are simply ideas that came to me and I wanted to put them down on paper. Perhaps if there is enough interest, I could run them in the future. . .

Premise: Reality is changing. What was once perceived as supernatural is becoming more common. (Preternatural?)

Starting Point: The group learns to harness their powers.

Ending Point: The group becomes powerful as individuals in their own right.

Basic Assumptions:
1. The individuals in the group seek to be part of a whole – are there others like them in the world or are they the only ones?
2. There are no large, over-bearing, governmental organizations designed to handle this situation. No Watchers, no Black Book, no Delta Project.
3. Unless directly confronted, local law enforcement and politicians will not become involved. Who polices whom?
4. The news media will approach everything involved and keep it with their “news of the weird.” This, and assumption #3, is designed to give the game a more “underground” direction.
5. Reality is changing due to something introduced into the system. (Will need to define what the something and system are, before game start.)

System: M&M, Scion, Mutant City Blues, Conspiracy X. My original take on this was to approach it from a Millennium or Fringe style aspect, not a superhero aspect. However, it could very easily become a “year one” game.

Premise: Dark world filled with monsters, both supernatural and human. Oppression is everywhere, but the oppressors hold the power (FREX: kings with armies). The players must confront this bleak landscape in an effort to bring hope into a hopeless world. Monsters are monsters. Ravenloft meets Kult

Starting Point: The cast bands together to help locals. They confront the minions of one of the great supernatural threats. After facing this threat, they realize that only they can face such foes – not local villagers. This leads them on to other standard adventures.

Ending Point: After discovering betrayals and back-room dealing on the human side, the party must decide if stopping with the human leader is enough. Or, do they go after the greater supernatural threat?

Basic Assumptions:
1. As bad as the oppressors are, many have built infrastructure with grand cities and castles for their subjects to admire and sometimes use. This also provided their subjects with work to perform, granting them food and sometimes shelter, as well.
2. The supernatural are real and follow many of the tropes from classical literature. Some have become very powerful individuals.
3. Standard high fantasy magic exists.
4. Monster hunting is limited to a small, grizzled brotherhood (pull info from Rippers?).
5.

System: ADD Ravenloft, Pathfinder (Mistfinder?), WoD, Stormbringer, Action Cards, FATE, Dragon Age. I was originally thinking clunky game system with lots of “stuff” when thinking on this game. However, due to the high fantasy aspect, I could also see doing this as a rules-light game and keep the focus on social interactions. However, I want some monster hunting, so some crunch will be needed.

Starting Point: Folk banding together for the common good of their “earl.” Due to their abilities, he keeps using them as allies or sending them out to help conquer other earldoms and ascend to king-hood.

Ending Point: The earl making the final bid to power. Have the players stood by his side or turned against him? What about the other earldoms, what local allies, or enemies are out there? What about the king, other kingdoms, and the fae creatures. . . as a new menace lurks off the coast.

Basic Assumptions:
1. Gritty setting where the average person dies in combat
2. Technology is roughly equivalent to the Dark Ages, chainmail – yes, plate and gun powder – no
3. Magic terrifies villagers. Few practice it and those who do are a secretive lot. It takes many years to become more than just an apprentice, assuming you don’t go mad or kill yourself first.
4. Coast lines, crags, moors, keeps, and mud-filled towns without roads all exist. This isn’t the Forgotten Realms, it’s more along the lines of Harn or Ars Magica on a bad day.
5. The group will be faced with moral dilemmas on a regular basis. How they react will help align or oppose them with the Powers that Be in the setting
6. Great sacrifice or suffering leads to great reward, for the good guys and the bad

System: Dragon Age, Runequest/Stormbringer, Pathfinder, Ars Magica, retro-clone. I want something that will support both the deadliness of combat and the fear of magic that can overwhelm villagers. 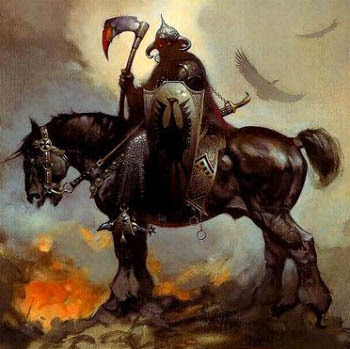 Low Fantasy #2
Premise: An unknown menace arrives on the shores. Long boats deliver a culture of warriors with more advanced armories and wizards with magics never before seen. They seek to conquer and enslave the peoples of the continent. Use the world from Low Fantasy #1 as a starting point.

Starting Point: Recovering from a civil war or sorts, the cast is forced to address this new problem. Overwhelming odds force a retreat and the party must find a way to make alliances with former enemies in order to confront this new enemy.

Ending Point: If the cast can gather allies, a final stand can be made against the invaders. The cast and their allies will be crushed by the foreigners, survivors scattering to the winds. Without allies, the cast will see an ever losing battle raging around them. What will they do?

Basic Assumptions:
1. More powerful or more readily available magic exists in the world, the players simply have never been exposed to it
2. The foreigners’ technology reaches to full plate, well-made blades, not too heavy crossbows, but not to explosives or guns
3. Some of the fae-creatures will become allies of the cast. Others will leave for Arcadia, closing the door behind them.
4. The final battle will be lost by the good guys
5. God-magick is weakened by the presence of the foreigner magic-users (or perhaps their priests?)

edited a new image in, as the other one dropped out
Posted by Undeadhost at 9:40 PM 4 comments: