The Barony of the Fields

There are tribes of humans who follow the grazing animals across the Barony of Fields. Each group has taken a different name for themselves, modeled on animals they follow or have come to associate themselves with.

The Seabhac tribe wanders along the mountains between Polworth and the Upper Bafron River. The Hrienn use hawk feathers as decoration. The Hrienn tribe fill the void between Polworth, the Lanark Forest, and the River Barony. Like the Seabhac, they use their namesake, the deer, for ornamentation. The Koatter tribe travel the border of the River Barony and Cambria to the southeast. They are known for hunting large cats and wearing their pelts. The Elgr tribe wander the land east of the Lower Bafron River and visit Leona twice a year for trading purposes. Other, smaller tribes dot the landscape and are seldom larger than an extended family of 45-100 peoples.

The tribes control the Barony of the Plains, but are known to wander outside of the barony. Some cross the Lower Bafron River into the Barony of the Eastern Coast, wander down into the River Barony, or even venture up into the lands of Polworth. The only area in which the tribes will not wander is a half day's travel around the Chantry in the Plains. The elders and less open minded amongst the tribes still fear the chantry as a place of the Tuathanas. The chantry does nothing to contradict this viewpoint. The tribes warn all who would wander their barony of the chantry, thus providing some security for the chantry.

On cold nights around the campfire, elders scare children who stay up much too late with stories of the evil wrought by the Tuathanas upon the Sea of Grass tribes. The mention of the dreaded centaur experiments, where tribesmen were grafted onto horses, antelopes, and other animals is where the elders generally start. When that doesn't work, voices are lowered to bare whispers and stories of the cha'kego are recalled. The cha'kego were built like ponies, but with an additional set of legs. The cha'kego could pull itself upright (ala centaurs) and use its fore-most legs like arms. The toes and claws of the fore-most legs were surrounded by a chitinous band that served as gauntlets of sorts. While the cha'kego were fast and strong enough to take down their prey with tooth and claw, their preferred weapons were the yataghan and the curved spear (flamberge/spear combo). The cha'kego coloration was grey to black with toughs of course, black hair, along the back of the neckline. 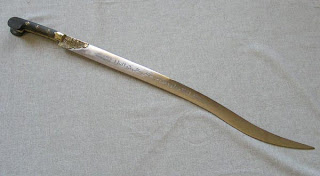 Posted by Undeadhost at 1:54 PM No comments: