I've been meaning to do this for a few days, now. Links of interest, from GenCon.

I found a copy of of Hammer's Slammers for use with the Traveller rpg. One of my favourite short story settings in rpg format, using rules I understand? FTW!

I missed this release last year. Malifaux is a minis game set in an alternate Earth, involving gothic, steampunk, and Victorian era rife with magic and wyrdness. I grabbed the basic book and Rising Powers. I'm just starting to read the core book. I picked these up, because they looked like they could provide interesting setting ideas for rpg games. The website needs some work.

Jason Blair was hanging out this year at GenCon. He's responsible for such greats as the Villainy card game, Wyrd is Bond rpg, and oh year, Little Fears (rpg). Well, he recently re-released Little Fears in a "Nightmare Edition." I haven't picked through it, yet. However, it promises to entertain.

The card game was in development for 8 months before the announcement was made. I think they've done a good job developing it thus far. There's more work to be done on it, but there's no reason it won't hit the Nov-Dec release date.

I haven't read the comic line, but I'm thinking of picking up a few graphic novels to see what it's like. Oh, and it's been optioned to be made into a movie that may begin shooting next summer. 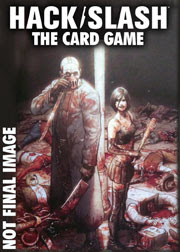 Do you need some awesome furniture for your games? Check out Geek Chic!

Monica's work of fiction is still available via the interwebs. You can find Queen of Crows here.

Got Steam? and Renaissance Fashions were two retailers on site with some pretty cool threads and gear for Victorian and Steampunk adventurers!

Mercs is a newer minis game with some pretty cool figs. What really stood out to me, though, was the concept art. They have some on their website, but it doesn't do justice to the big blow-ups they had at the con.

Outbreak: Undead claims to be the best rpg out there. They also claim that Eden Studios, Inc. went out of business and that All Flesh Must Be Eaten is out of print.

Huh. Really? You mean this product right here that I sold all weekend at the GenCon booth? ~Derek

Anyways. For $45 you get a black and white, hardcover book that claims to be 450 pages. I think that's single sided pages. The type font is about 20 and it's double spaced. The design is set up to look like a survivor's notebook, complete with a 12 year old's pencil sketches. This is a $18 game that belongs in a soft cover binding.

I really wanted it to push the bar and make us work harder at creating better product. That didn't happen. What did happen is that several of our fans and at least two of our authors let them know that Eden Studios, Inc. is still in business.


One more link. This one came up in sidebar conversations at the con. Atmoic Robo and the Fightin' Scientists of Tesladyne is a cool idea for a comic. They go completely tongue-in-cheek and it comes across as being funny, then with action. This would be opposed to the Big Red Gun, in that BRPD strikes me as action, with funny.

I picked up the first graphic novel. I found it a fun read with lots of good quips. I'm not sure I'm satisfied with the amount of material to cover price equation, but I am looking to pick up a couple of the follow up graphic novels.
Posted by Undeadhost at 10:57 PM 1 comment: