Where are you from?

I know some folk who fought their way to and through Mercy Hospital. They went on to Riverside and it was a bust. They crossed the Whitney County Bridge to get to Fairfield. They found nothing worth staying for in Fairfield and continued on to Newburg. I hear they tried to reach the Metro International Airport, only to find out their flights had been cancelled. The Allegheny National Forest wasn’t safe for campers and not because of the bears. The Millhaven base was near there and near Outpost Echo, the northeast safe zone. I guess they didn’t stay there long, either.

Savannah wasn’t any better, really. We went through fancy hotels, gun shops, and even a mall. After Savannah, we went to Rayford. There wasn’t much there, either. We met those other survivors there, helped them cross a bridge in a fancy car. They were looking for a boat down in the docks, hoping they could make it to the Florida Keys. I hope they had some luck.

We cut a swath through Griffin County, heading for the Whispering Oaks Amusement Park. Turns out, the folk we were hoping to meet up with there, had been overrun. Funny thing, posters for the Midnight Riders concert were still up, even though they never got a chance to play the venue.

The Village En Marais faired better than most did against the infected. Better than Shreveport or Bossier City. After that, we moved through Mississippi. I think the town’s name was Ducatel. There was a sugar mill there, but all I really remember of that place was all the rain. It kept coming and coming.

We hitched a ride with a former shrimper and snuck into NOLA via the waterways. It was just more of the same Bienville Park, the bus station, the market along the waterfront, Sant Roches Cemetary – all empty, all dead. We made it to Veterans Memorial Bridge, to where they were taking survivors to cruise ships. Can you imagine? Cruise ships sailing the seas with no infected on them. Such a beautiful idea.

I’ve met other survivors. They come from all sorts of places. Fort Harris County in Texas. Milwaukee, Wisconsin. British Columbia, even. So, where are you from?

Half Full or Half Empty?

The world ended. All of the crazies were right. World War 3 was fought over water, someone's deity sent down a plague, and the end was really fucking nigh.

Edgesphere, a pharmaceutical company, came up with a way to better purify water. They went after the really foul water, anything hard to clean up and ripe for government grant money. They succeeded in devising a chemal that could cut standard purifying time in half. They revolutionized the conversion of sea water to drinking water. They also found ways to supply pure water to those countries suffering from a lack of water in Africa and the Middle East.

We do not know where it started or how it started. Research and rumour suggest that the G.I.s returning from the world war in the Middle East brought it home. They were said to be carriers. At first, all of the research confirmed those theories. Later, it would come out that the government had covered up the problem in the Middle East. Our access to foreign news was shut down during the war. Even Internet access to foreign sites and hosts was removed from USA citizens. So, maybe the military boys weren't carrirers. Maybe the potential existed in all of us to be carriers.

That was three years ago. Some things have changed since then. Water is clean, without needing a chemical enhancer. Gasoline in autos needs a chemical enhancer to clean it for use. There are no more governments to wage a world war.

At least one thing has not changed: the deadliest creature on the planet is still man. 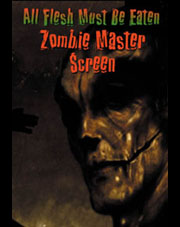 What it is: a Deadworld for AFMBE

What you will need: AFMBE corebook, but the Zombie Master Screen, both Book of Archetypes, One of the Living, and Atlas of the Walking Dead will help. The ZM Screen is a standard screen, all the damage stats you will need for your usual weapons. You also get an article on running horror survival games and a scenario. The two Book of Archetypes books are filled with pre-made characters. The first one will likely be of more use, overall. The Second Book of Archetypes has characters for modern games, Fistful o’ Zombies, Enter the Zombie, and Pulp Zombies. This means that your use ratio will be much smaller. If you can not find either of the archetypes books in your local game store, I suggest picking up the .pdfs via drivethrurpg.com. That will allow you to print out only the characters need and keep the game moving. One of the Living is everything a zombie master or player will need for surviving after the fall. Since this Deadworld is set after the fall, it is right up your alley. Atlas of the Walking Dead will help flesh out the zombies. You may want something beyond the usual shamblers or runners.

Antagonists: Your standard zombie movie is about humans fighting off other humans, while trying to avoid zombies. In this setting, I want to up the ante. I suggest using quick zombies ala 28 Days Later or the most recent Dawn of the Dead. If you really want shambling zombies, I think it will be more challenging than usual, as there is not much left of the world. Humans will be few and far between, in theory. Zombies are the main antagonist in this setting.

The characters should be survivors. This is after the fall, after all. Norms are not going to cut it in this world.

The chemical designed by Edgesphere is no longer important. Some characters may want to go after it or those involved with it. ZMs are free to explore as they feel free.

This setting is all sorts of messed up. You can combine Last Man Standing, the aforementioned Dawn of the Dead, and suck in any end of the world type game material. Mix, match, do a little shake ‘n bake, and you're done.
Posted by Undeadhost at 9:11 PM No comments: